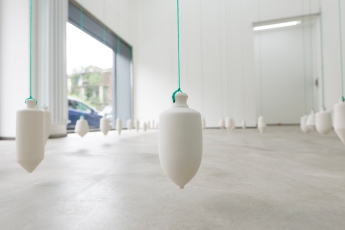 MDR’s work explores conditions and experiences of power, alienation, invisibility and displacement, through a critique of global economic and political systems.
Her installations call into question dominant historical narratives, disrupting perceived notions of the post-war era with her investigations into the materiality of evidence and the status of knowledge. She seeks to make tangible the ways economic, political and military structures of power, taking place out of sight, impact our everyday lives.
Offering a reflection on the relationship of visibility to invisibility, Rapicavoli invites her viewers to reconsider the present through a critical analysis of the past.
Her practice originally comes out of a background in a documentary photography, film and video and has developed to include sculpture and installation. Such current work uses the space of the exhibition to draw attention to airspace as a place of military power and control and to all the invisible maneuvers that happen in the air. The other body of work she has been working on in the recent past isabout the migration process of refugees attempting to cross the Mediterranean.
Using aerial and naval maps she depicts prohibited and restricted areas in the airspace, makes visible underwater human interventions and try to give shape to invisible conditions that historical events have permanently changed.
Moreover, her Sicilian background has moved her to investigate another social and economic structure of power, the phenomenon of the Mafia: using photography and sculptures she tries to draw attention to the elements that make up Mafia as an ideological construct.
MDR  artistic research has progressively moved from the singularity of specific media to an interest in combining them in order to generate new methods of production and reception.  The combinatory use of different media helped her to give form to the content which calls for a more complex way interaction of the viewer. She investigates and experiment on how a compositional/installative discourse can be pushed forward in the space-time frame of her artistic practice.